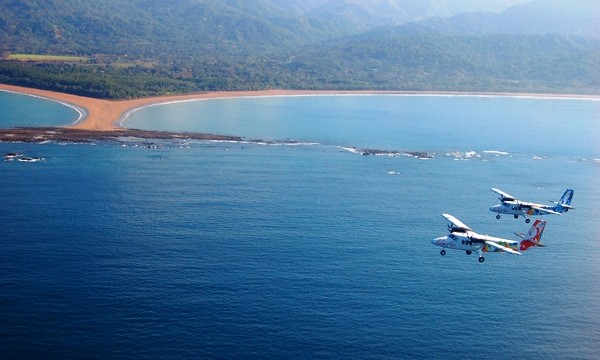 Update: Nov. 12, 2016 Based on a recent article from the Tico Times, it appears that the location for Costa Rica’s next International Airport has been moved to Orotina. Click here to view the article.

Traffic around the Juan Santamaría International Airport is becoming increasingly congested and the decision to move the airport to Orotina should alleviate this problem. For the time being, it seems that flights to Southern Costa Rica will be served by regional airports in Puerto Jiménez, Golfito, Palmar Sur, Drake Bay, San Isidro and Quepos.

Guanacaste in northern Costa Rica is a beautiful region–think of every picture-postcard idea you have about Costa Rica, and you’ll find it here. But bad roads and a small airport meant it was hard to get to. Real estate prices and tourist numbers were pretty low–until an airport in Liberia was upgraded to take international flights.

If you didn’t buy in northern Costa Rica a decade ago, you’re too late–Liberia’s first international flight was in 2002.

But the exact same story is playing out right now in southern Costa Rica. Not only can you get in on the right side of the buying trend…but you can do so at 8 cents on the dollar compared with northern Costa Rica–that’s the type of anomaly that gets my attention!

I believe southern Costa Rica is more beautiful than its northern counterpart. Emerald-green hillsides sloping down to deserted beaches…cloud-ringed mountains…lush, raw nature at its best.

But a new paved road will be in place by next year. And the government have settled on Palmar Norte as the site of a new international airport–and allocated funds for construction. The airport contract is out to tender. The neighboring hospital (a requirement for an international airport) is up and running.

Costa Rica´s Civil Aviation Authority (Aviación Civil) is currently working on the development of a new international aerodrome to be built in the South Pacific region of Costa Rica. To be constructed on old banana and plantain farms, technical studies and environmental impact assessments are underway for this $42 million project. The new Costa Rican airport will be built between the towns of Sierpe and Palmar de Osa in the province of Puntarenas and is set to open in 2014. The airport will have a 2400-2600 meter landing strip which will be large enough to receive Boeing 747s, Airbus A320s and Embraer 190s. The terminal will be large enough to accommodate 150 passengers simultaneously. Previous plans to build a landing strip long enough to receive transatlantic flights have been put on hold.

The confirmation of plans to build an airport in the South Pacific of Costa Rica is one of a series of infrastructural improvements that have benefitted the area. This includes the opening of the Caldera highway which has encouraged more tourists to visit the South Pacific region of Costa Rica. The new highway has reduced journey times from San Jose to the South Pacific to less than 3 hours. Resurfacing works on the Costanera highway, as well as the installation of new

Once the new airport opens, I expect property prices here to follow the pattern of those in Guanacaste. If you missed the opportunities in northern Costa Rica a decade ago, this is your second chance–go south.

← You Snooze, You Lose. The Osa Pennisula Condo Market is About to Catch Fire
Costa Rica’s Southern Zone Ranks 3rd in The World’s Best Real Estate Markets →
Comments are closed.