Paige and Bill Schmuhl Meet Costa Rica: What It’s Like to Move to the Town of Ojochal Costa Rica 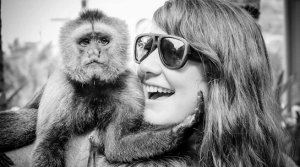 Paige and Bill Schmuhl began their Costa Rican home search in 2017 with a budget under $300,000. Watch their House Hunters International episode and read a follow up about their experience after the moving process and getting settled into the area after their home purchase in Ojochal.

When my husband told me he wanted to move to Costa Rica to live “amongst the sloths” as he put it, I thought he was joking. Little did I know he had put into motion this crazy life-changing event.

Our first trip to Costa Rica was a whirlwind. We researched as much as we could but nothing truly prepared us for what we would be going through. We booked a twelve-day trip and after hearing our friends refer to the popular area of Tamarindo, as “Tama-gringo” we decided to explore further south.

We landed in the town of Dominical. The real estate company we worked with, Costa Rica Real Estate Service, did everything for us from booking our hotel and showing us homes, to making our adventure and dinner reservations. Truly a full-service company.

We spent five days scouring southern Costa Rica to find the perfect home. We searched in so many towns that I can’t even remember the names of them all. On day five we had found what we wanted. A perfect little home next to the river with a large yard for our dogs and a five-minute drive to the beach. That day we signed the paperwork, transferred the money, and enjoyed a fantastic dinner in our new town of Ojochal.

Getting Our Stuff to Costa Rica

You go through the process of selling everything you own. And it’s hard. Moving internationally is very expensive so you want to take as little with you as possible. It doesn’t matter how conservative you think you are being; you still won’t need half of the stuff you bring.

We used a cheaper company to move our home goods and they promised a three-week delivery. Don’t make our mistake. Apparently that three weeks only applied to the time it would take to physically get to Costa Rica. We waited another five weeks for it to clear customs, be charged import taxes, and then be delivered.
While we are on it, let’s talk about delivery. When your new address is something like 500 meters before Escuala Tortuga on left; deliveries become more difficult.

I am happy to report that everything we packed made it and in exactly the condition we packed it in.

Getting the Dogs to Costa Rica

We own two very sweet, and very large dogs. It was no simple task to get them to our new home.
The airlines had rolled out new rules on how dogs fly on international flights. What we thought would be a simple, check them as luggage thing, turned into a three-day dog parade across the United States.

Our dogs were picked up early one morning in Scottsdale, AZ and driven to the Phoenix airport. They flew to Houston and were boarded overnight at an offsite pet hotel. The next day they boarded a new flight to Ft. Lauderdale, were driven to Miami, and stayed the night in another kennel. The next day they flew from Miami to Costa Rica and spent three hours afterward being cleared through customs.

We got them back in one super fluffy and happy piece. I think it was more stressful for us than it was for them. I like to imagine their nights were spent chasing other dogs around, eating bacon, and living the good life.

Figuring Out How to do Basic Things in Costa Rica

Basic things like getting a bank account isn’t as easy in other countries as it is in the states. We had to provide a lot of documentation and for some reason, even though I’m on the account, I can’t deposit checks with my name on it. I’m saving solving that mystery for another day.

We relied heavily on the real estate agency we bought our home through and on the kindness of strangers to figure out where everything was. Yelp is not a thing in Costa Rica.

Thanks to many drunken nights at our local village bar, La Mona Grita, we now know where to buy the cheapest groceries (Palmar Norte), the best vet around (Uvita), where to go shopping for home goods (Panama), and how to smuggle said home goods into Costa Rica.
All in all, it’s been a great adventure.

Our town of Ojochal technically isn’t big enough to be considered a town, it’s more of a village. And we live in the village, not to be confused with the “Phases” which are up in the mountains. We live a five-minute drive from Tortuga Reserve. You know when you see those cute videos of all of the baby turtles being released into the wild? That’s where we live. And that’s what we do. Right now is prime turtle releasing season and it’s so much fun!!! You get a bucket full of baby turtles, walk them chest deep into the ocean, and then let them go. One by one the littles swim away.

This same beach is also a bird and crocodile sanctuary. We didn’t realize the crocodile part until we went paddle boarding at sunset (feeding time) and had a local family scream at us from the shore to come to land. Who knew it’d be so hard to see all of the crocodiles in the water while you two were in the water? No limbs were lost.

All in all, I think we made the right decision to move here. The food is fresh, the people are nice, and the sunshine can’t be beaten. Our friends and families think we are crazy, but we just think we are living our best lives.

Paige spent years in the corporate retail world and now considers herself an entrepreneur. She and her husband own a small hotel in Indiana as well as a food truck in Colorado. Paige dabbles in writing and photography in her spare time but her one true passion is travel. Paige and Bill have two dogs, Maiya and Gonzo, and they all relocated to Costa Rica in December of 2017.